Recent Lafayette government and law graduates have been admitted to top law schools throughout the country, while others have pursued graduate studies in political science, international affairs or public administration. Programs at Harvard University, George Washington University, the University of Pennsylvania, and the New York Film Academy have served as past postgraduate schooling destinations. 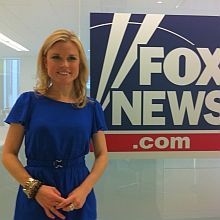 “I always wanted to work in news,” says Fox News reporter and news editor, Meghan Baker ’07. And, as she has learned since graduating, “If you want to do something, you can. Always stay positive because hard work and persistence pay off.”

In addition to that sense of destiny she felt in a pull toward news, Baker knew which college would best suit her goals. “I wanted a college that didn’t feel overwhelming, allowed me to have a relationship with my professors, and offered the opportunity to run Division I track and field.” The government and law and English double major leveraged her studies into a focus on journalism and politics, which led to a special project, the student-produced Election Night broadcast. “This allowed me to explore if I would want to do to on-air reporting,” she recalls. The project introduced her to the media and journalism circles she now moves in.

“I coordinate, write, edit, and produce content for FoxNews.com. I also have an on-air hit on our FoxNews.com LIVE show Tuesday–Friday at 11:20 a.m. explaining what our reporters for Fox News are covering for the day.” She adds that she’s always looking forward: “Right now, I am developing my own technology-based segment.” As they say in the business, more on that story to come… 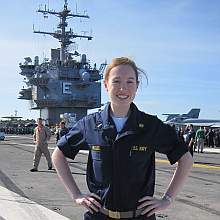 When most people think of a courtroom, they don’t picture an aircraft carrier. But for Lt. Lauren Hugel ’06, legal assistance and defense attorney in the U.S. Navy Judge Advocate General (JAG) Corps, a banging gavel may compete with the roar of an F/A-18 fighter jet launch.
“Navy JAGs provide legal assistance to military service members, retirees, and dependents,” she says. “We also defend sailors and Marines charged with violations of the Uniform Code of Military Justice and advise commands on legal issues ranging from ethics and environmental law to military justice.”

At Lafayette, Hugel’s government and law studies combined with her love of the military. The intimate class sizes helped her find her voice. “I couldn’t hide in the crowd,” she notes. “This helped me become comfortable articulating my thoughts and voicing my opinion during class discussions, something I went on to do in law school, and do today with my colleagues at work.”