On May 29, 1930, a dedication ceremony took place on the steps of Kirby Hall of Civil Rights, opening the doors to Kirby Hall and Kirby Library. 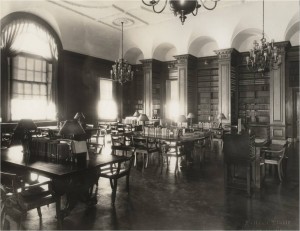 A story in the New York Times declared that at $590,000, Kirby Hall was the most expensive building per square foot in the world.1 The New York architect firm of Warren and Wetmore, famous for their work on Grand Central Terminal, was chosen to design Kirby Hall and Library. The Library’s interior is influenced by the works of English architects Sir Christopher Wren and Grimling Gibbons.2 Also worthy of note are the Caleb Boyle portraits of John Jay and Thomas Jefferson that hang in the reading room. These portraits were presented to Kirby Hall in 1943 by Allan P. Kirby, son of Fred Morgan Kirby, Kirby Hall’s benefactor.

The Library’s book collection quickly grew under the direction of Professor Miller Steever, head of the Government & Law Department and first Director of Kirby Library and the Kirby Museum. Between 1930 and 1932, various acquisitions were made for the collection. One of the largest acquisitions during this time period was the donation of the law library of H. Seidel Throm (Class of 1895), a successful estate lawyer in Berks County, Pennsylvania. The books, donated by Mrs. H. S. Throm, included one thousand volumes of Pennsylvania Superior Court reports, forty volumes of Purdon’s Pennsylvania Statutes, and many other Pennsylvania law related works.3 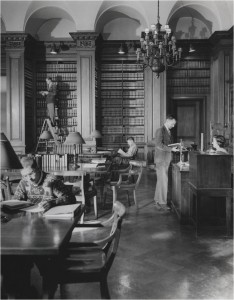 Although currently open to the entire campus, Kirby Library was originally intended for the exclusive use of the Government and Law Department. Any student outside of the department, who wished to borrow material from Kirby Library, had to request permission from Professor Steever. This policy, though not always popular with the student body, remained in place until about 1970. In 1998, Kirby Hall endured its first major renovation which included the addition of smart classrooms, an updated lecture hall, and a renovated library. Along with the 1998 renovations came the dismantling of the Kirby Museum. Most of the manuscripts and artifacts held at the museum are now in the College’s Special Collections. 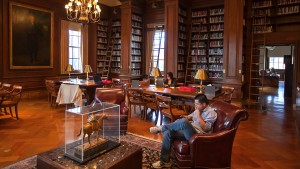 Today, visitors to Kirby Library can see the space as it looked almost exactly  in May of 1930. Many of the first tomes belonging to the collection can still be found in the reading room along with the first shelf lists and sign-in books containing the names of students who used the library.