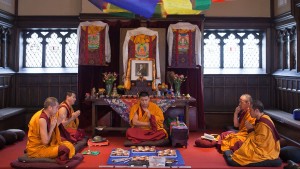 Eight exiled Tibetan monks on campus for a three-day residency.

Religion and Politics is a coordinate major between the Departments of Government and Law, and Religious Studies. The major proceeds under two assumptions. First, religious phenomena are a fundamental and often essential component of political analysis. Second, the political implications of religious beliefs, behavior, and institutions are important to the study of religion. In brief, this major gives students greater insight into political dynamics and enhances their ability to assess the impact that religious values have on politics.

Requirements for the A.B. Religion and Politics Major:

Government & Law and Foreign Language is a coordinate major between the departments of Government and law, and Languages & literary studies. This major is good preparation for students who are interested in pursuing careers or in focusing on intellectual issues that relate strongly to both political science and international studies and to foreign language.

The major provides the background needed for careers in diplomatic service, for work in international organizations or foundations, and for pursuing higher degrees in fields such as Area Studies and International Affairs.

Requirements for the French track:

Requirements for the German track:

Requirements for the Spanish track: